Experian® Hitwise®, a part of Experian Marketing Services, has analyzed the top 1,000 search terms for 2010 and Facebook was the top-searched term overall. This is the second year that the social networking Website has been the top search term overall, accounting for 2.11 percent of all searches. Four variations of the term "facebook" were among the top 10 terms and accounted for 3.48 percent of searches overall.

The term "facebook login" moved up from the 9th spot in 2009 to the second spot in 2010. YouTube was the third most-searched term in 2010, followed by craigslist, myspace and facebook.com. Analysis of the search terms revealed that social networking–related terms dominated the results, accounting for 4.18 percent of the top 50 searches.

Facebook was the top-visited Website for the first time and accounted for 8.93 percent of all U.S. visits between January and November 2010. Google.com ranked second with 7.19 percent of visits, followed by Yahoo! Mail (3.52 percent), Yahoo! (3.30 percent) and YouTube (2.65 percent). 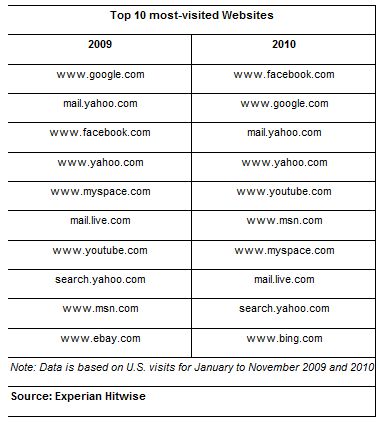 1. Dancing with the Stars
2. American Idol
3. Young and the Restless

•The top generic search term was "hulu" within Television category

Sports - the top searched for athlete was Tiger Woods and the top sports team was the Dallas Cowboys from within the Sports category.

News and Media - the top searched for person was Bret Michaels followed by Tiger Woods and Sandra Bullock within the News and Media category in 2010.

Employment - Indeed accounted for 2.47 percent of all searches in the U.S. among the top 50 terms for the Employment category in 2010 when combining common search terms — e.g., indeed and indeed.com.