comScore, a leader in measuring the digital world, reported holiday season retail e-commerce spending for the first 20 days of the November – December 2011 holiday season, as well as its official spending forecast for the season. For the holiday season-to-date, $9.7 billion has been spent online, marking a 14-percent increase versus the corresponding days last year. Wednesday, November 16 has been the heaviest online spending day of the season to date at $688 million.

“The 2011 online holiday shopping season has shown strength in the early going with a year-over-year growth rate of 14 percent,” said comScore chairman, Gian Fulgoni. “With the persistent backdrop of macroeconomic uncertainty and continued high unemployment, consumers appear to be increasingly favoring the online benefits of convenience and lower prices. Based on the expectation that these positive spending trends will continue for the season, this year promises to be a Merry Christmas indeed for online retailers.”

The official comScore 2011 holiday season forecast is that online retail spending for the November – December period will reach $37.6 billion, representing a 15-percent gain versus year ago. This strong growth rate represents an improvement compared to last season’s 12-percent increase. 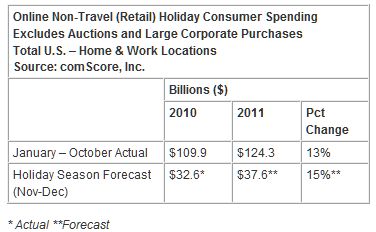 “Due to the strength leading up to and during the holiday season-to-date, comScore’s statistical models are forecasting that U.S. retail e-commerce spending will grow at a rate of 15 percent versus last year,” added Fulgoni. “These projected growth rates reflect the significant channel shift we’re witnessing from offline retail as an increasing number of consumers rely on the online channel for initial browsing, price comparisons and completing transactions. With this continued momentum, comScore anticipates nearly $38 billion in online consumer spending during the November and December time period.”

Alongside its reporting of behaviorally monitored e-commerce spending, comScore is also conducting regular surveys of approximately 1,000 consumers to determine attitudes and sentiment in regard to the holiday shopping season. In the most recent survey, conducted during November 17-21, 2011, consumers indicated that they believe retailers’ promotional activity for the early part of the season has increased in relation to last year. Specifically, 33 percent of respondents indicated that they are seeing more discounts, sales and promotions vs. last year compared to just 7 percent who said there were fewer.

One of the more prominent incentives for online purchases is free shipping. When asked how important free shipping is for making an online purchase this holiday season, slightly more than three-quarters (76 percent) of consumers indicated it was important and 47 percent indicated they would abandon a purchase if they got to checkout and found that free shipping was not included. In addition, comScore behavioral data indicate that 40 percent of retail e-commerce purchases in Q3 2011 included free shipping, and that percentage peaked in Q4 2010 at 49 percent. 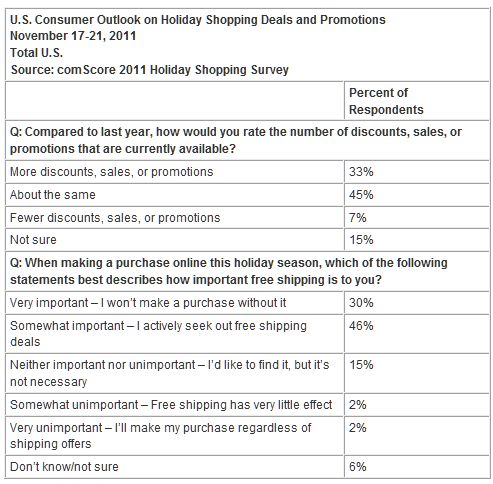