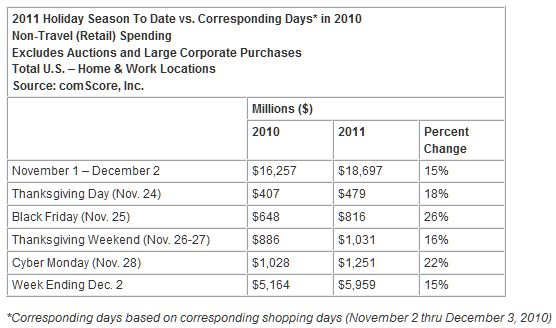 “Cyber Monday kicked the week off with a bang as consumers opened their wallets to the tune of $1.25 billion, but it was only the beginning of a very strong week of online holiday spending,” said comScore chairman Gian Fulgoni. “Tuesday and Wednesday followed with billion dollar spending days, helping Cyber Week reach a record weekly total of nearly $6 billion in spending. As the deals from this week expire, it will be important to see the degree to which consumers return to the same retailers to continue their holiday shopping, thereby helping improve retailers’ profit margins, or if we experience a pullback in consumer spending – which has occurred in previous years – before promotional offers and spending intensity pick back up in earnest around mid-December.”

One of the most prevalent holiday season promotions used by online retailers is free shipping, which typically peaks around the Cyber Monday period. comScore’s analysis of the incidence of free shipping used for online retail transactions shows that this incentive is being used at record levels over the first few weeks of the holiday season. Throughout the 2011 holiday season, more than half of all transactions have included free shipping with rates increasing later into the season. The week of Thanksgiving (week ending Nov. 27) saw free shipping occur on 64.4 percent of transactions, while Cyber Week has maintained a similar level at 63.2 percent. In each case, these rates were approximately 10 percentage points higher than last year. 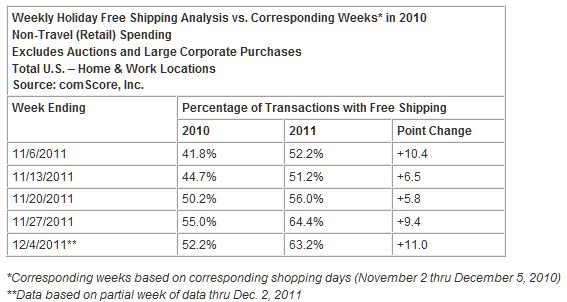 “Free shipping is one of the most important incentives that online retailers must provide during the holiday season to ensure that shoppers will convert into buyers,” added Mr. Fulgoni. “Consumers have come to expect free shipping during the holiday promotion periods, and retailers, in turn, have realized that they must offer this incentive if they want to maximize their share of consumer spending – especially at the outset of the shopping season. In fact, more than three-quarters of consumers say that free shipping is important to them when making an online purchase, and nearly half say they will abandon their shopping cart at checkout if they find free shipping is not being offered.”

The Importance of Free Shipping to Online Shoppers 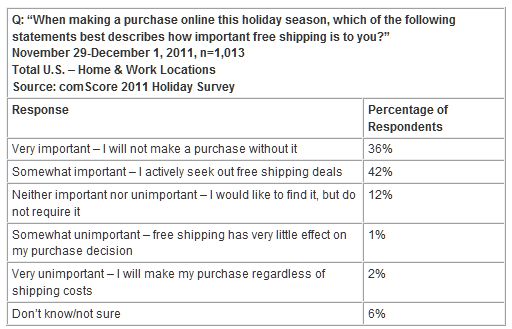 Despite its cost to retailers, free shipping also has a couple of important benefits to online retailers. First, it tends to generate higher average order values, which helps retailers to at least partially offset lower margins. Second, this incentive has for four years had its own marketing event – ‘Free Shipping Day’ (Friday, December 16 this year) – when thousands of merchants offer free shipping with delivery by Christmas Eve, and in past years Free Shipping Day has helped bolster online spending activity later into the season. Last year’s Free Shipping Day, for example, was the third heaviest online spending day of the year at $942 million, representing a dramatic 61 percent increase over the corresponding shopping day the previous year.